Have you ever wanted to make great bread at home but lacked what you thought were the necessary skills? I’m here to tell you just how gosh darn easy it actually is. What helped me through this yeasty delicious phobia was none other than King Arthur Flour.

Up until this point my breads have always been disappointing. Either they were flat and heavy as bricks, or were tough and needed chainsaws to manage. I could replicate french pastries, but somehow great bread alluded me.  That’s when I put bread making on my bucket list and waited for everything to come together.

King Arthur Flour in all of their great learning efforts and community outreach hosted their traveling baking demos which just happened to find itself in St. Louis this past weekend. While samples weren’t on the menu, we were taken through every facet of of whole wheat baking which is much more troublesome than it’s regular counterpart. I learned so much that I had to share my knowledge so that anyone else who was afraid to make their own breads could conquer their demons and be rock stars in their kitchen. (Homemade bread really has the power to elevate you to rock star status, trust me).

The signature recipe which KAF swears by is Walter Sands’ Basic White Bread. It’s a sandwich bread that is wonderful for everyday use in and around your home. It also makes amazing toast, and I’m sure is awesome for about a hundred different other uses. What helped me the most was understanding how and why certain things worked in bread making. For starters, knowing more about wheat helped me understand just why whole wheat bread can be troublesome.

White flour is known by many names. It can be all purpose flour or refined flour.  Some companies bleach or bromate it to get that stark white color which removes much of the nutrients. This is why you’ll see many names you can’t pronounce on the ingredients list of your flour, they’re adding back in synthetic nutrients. This flour is great because of its mild flavor and lighter texture, it is what most people are accustomed to in our country. There are different levels of protein content which affects the crumb of your baked goods. Cake flour produces tender and very fine crumbs, then you have all purpose flour which is middle of the road, and finally bread flour which produces chewy more dense crumbs.

The reason I explain this to you is that in bread making, developing gluten is what the whole process is about. It’s the difference between fab and flab. When using whole wheat flour in a recipe, the bran (which is the outer shell of the wheat berry) can actually damage gluten development. Even when ground down finely, the shards tend to break up your gluten development. This was a VERY important lesson I learned. A good rule of thumb is that if you’re using a recipe which does not designate whole wheat flour being used, then start off  by substituting 1/3- 1/2 of the flour called for whole wheat flour. Recipes using all whole wheat flour are designed specifically for this hiccup while still developing gluten.

Another great tip I received is that if you are using some whole wheat flour, such as in the Walter Sands’ Basic White Bread, it’s best to add your liquids called for in the recipe to the whole wheat flour first. Allow to stand for fifteen minutes before proceeding on with mixing and kneading. This soaking period allows the bran to absorb moisture so you get better gluten development.

The next item we tackled is learning about yeast, the different varieties and how best to coax them to our will. They are a fungi whose purpose in baking is to help baked goods rise naturally, versus baking soda or baking powder whose leavening abilities are derived by chemical reactions. Yeast starts to feed on their favorite food, sugar. Once they digest the sugar, they turn to the starch in flour into sugar. From their digestion, carbon dioxide, alcohol and organic acids are created. The “farting” of the yeast aka releasing of carbon dioxide gets trapped in the bread dough’s elastic web of gluten. The alcohol and organic acids produced give off a distinct flavor to the dough enhancing its appeal. Flour can provide yeast with a continuous food source and it’s how many sourdough starters are fed.

There are three varieties of yeast that us home bakers will come across, active dry, instant and rapid rise. Their differentiation is mainly due to the particle sizes, active dry being the largest, and rapid rise being the smallest. Once opened, yeast is best stored in the freezer to help prolong its shelf life.

Active dry yeast requires proofing to help wake up and get the yeast digesting. This is because there are so many active cells jam packed on the inside of the particle and more than likely, some dead cells on the outside. In the proofing process, adding warm water and some sugar (food) to the active dry yeast gets them digesting. The water turns a milky brown and foam develops on top which is the byproduct of this process. The biggest mistake people can make is skimming this awesome foam- don’t do it! Or, by having the water too warm when proofing. A good rule of thumb is to have the water at 90-110 degrees Fahrenheit or warm enough for your newborn (the wrist trick works great).

Instant yeast is smaller particles of yeast that can be added directly to the dough you’re working with. No proofing is necessary. It can be interchanged with active dry yeast called for in recipes. A single packet contains 2 1/4 teaspoons.

Rapid rise yeast is good for nights when you want to make pizza but don’t have time for the two rises usually called for in dough recipes.

Before even embarking on recipe, there were some additional tips that made a huge difference. One was how to correctly measure flour. KAF did it again and showed us how scooping flour can result in tough baked goods as we’re taking away valuable moisture. The best way to measure out flour in a recipe is to first fluff, aka stir your flour in its canister. Then you sprinkle the flour into your measuring cup and finally level off the cup. This should result in a perfect amount every time to give you consistency when baking.

In the recipe, there are additional ingredients called for and it was interesting learning about why they might be included. While some seem to cancel each other out, it’s what makes this recipe a good sandwich bread with durability, tenderness and crumb structure.

Now while this recipe shows you how to pull the bread together by hand, you can absolutely use a bread machine (which will do all this for you) or use a stand mixer. With a stand mixer, you would combine your ingredients for about 1-2 minutes before kneading by hand. Of course you can knead in the bowl with your dough hook, but I actually learned how therapeutic kneading can be and how it allows you to tell the moment your bread is perfect.

Kneading bread  is actually way more relaxing than I ever knew. It’s a gentle rocking motion that coaxes the gluten out of the dough. This video shows exactly what I should have been doing all these years. You’re using the palms of your hands, and it’s a process that actually warrants less mess and toughness. It is ready to rise when the the dough springs back instantly when you gently poke it, or feels like when you touch your cheek.

The next demystifying portion of our program was relating to “punching” the dough down after its first rise. This is actually very damaging to your dough and should be done with great care. Since we were making two loaves with our recipe, we cut apart even amounts. On a lightly floured surface we then de-gassed our dough by pressing down with our palms on the surface evenly. From there we shaped our dough. Here’s another great video on degassing and forming bread into loaves from King Arthur Flour:

Now some things our demonstrator pointed out was that with coating your pan, you can do so with butter, but beware that it may burn. It has a low melting point, and usually oil or shortening works best. Her method for folding the dough was also interesting. Her theory was that with just folding together dough like you would an envelope, sometimes you can end up with large pockets of air in your dough instead of nice even air bubbles. Pinching the seams helps too.

I encourage each of you to attend the King Arthur Flour traveling baking demos, or head up to their headquarters where you can take more in depth classes. On my last visit there, which you can learn about here, I toured their facility but sadly didn’t take part in any of their classes. Of course I am now kicking myself because there is so much knowledge they have to impart! I’m still learning and will definitely keep everyone up to date on my bread making escapades, but I do invite each of you to share with me your experiences and tribulations. We can help each other in the name of bread!

To full plates and eating your tarte out. 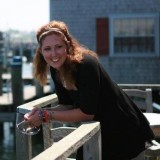 […] a trick from what I learned at a baking demo, I incorporated potatoes into my dough to create a more tender dough that would compliment cinnamon […]